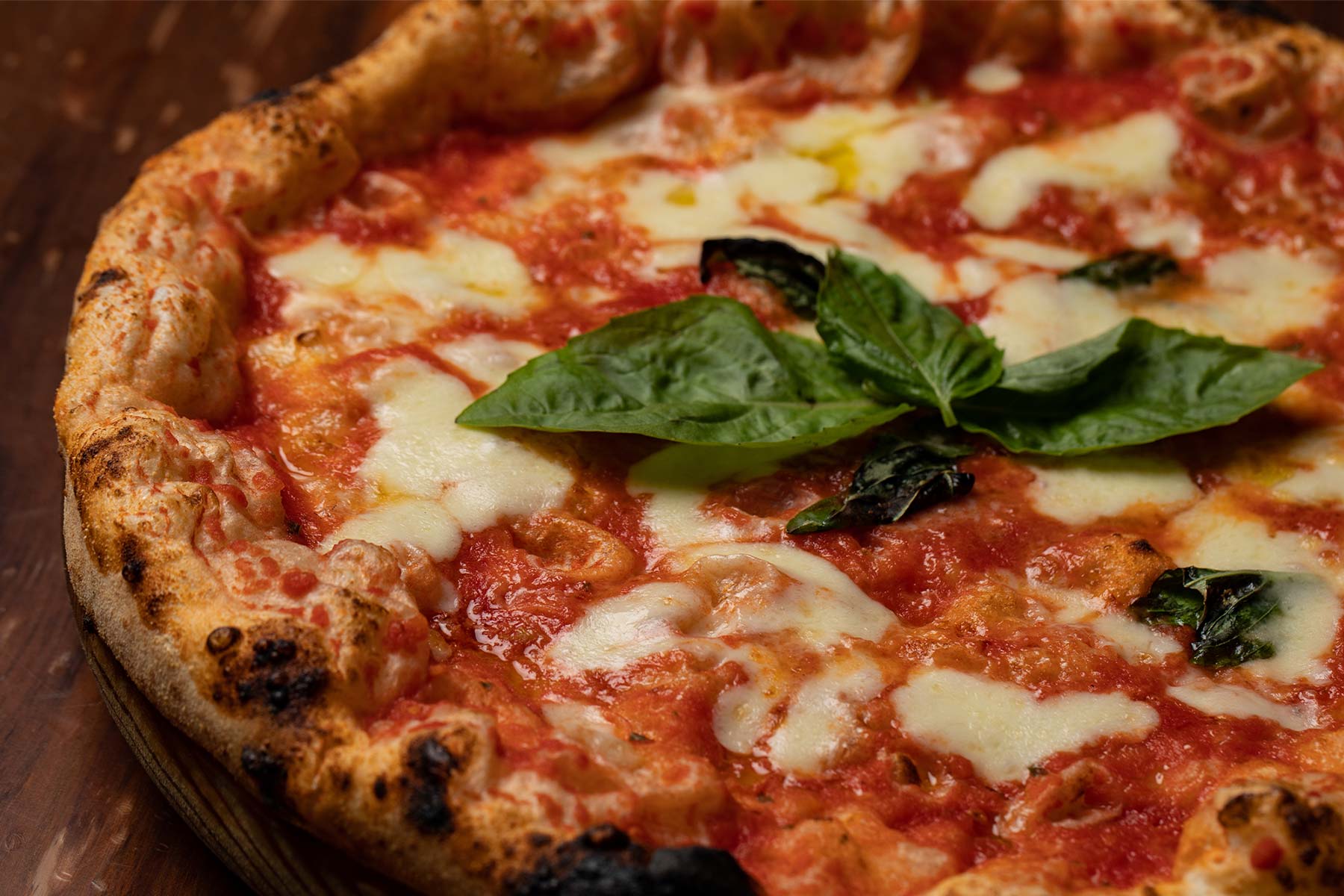 Neapolitan Pizza is not about the tomatoes, nor the cheese, though those are utterly delicious and taste uniquely like Naples, but at its heart: Neapolitan pizza is all about the crust! Airy and puffy at the outside rim, flat and almost soupy in the centre. There is nothing quite like it! The Neapolitan Pizza that we know today has nearly 500 years of history behind it. It was originally a hugely-popular street food, but at first it was eaten only inside the Naples city walls. Even if it was never mentioned in recipe books of the time, travellers’ accounts and journals from the mid-1800s mention it. One of most famous was from Alexander Dumas who, after a journey to Naples in 1835, describes it: “The pizza is a sort of bun like those made at Saint Denise: it is round, and made of the same dough as bread. It is of different sizes according to the price. The pizza is prepared: with oil, with bacon, with lard, with cheese, with tomatoes, with small fish.” 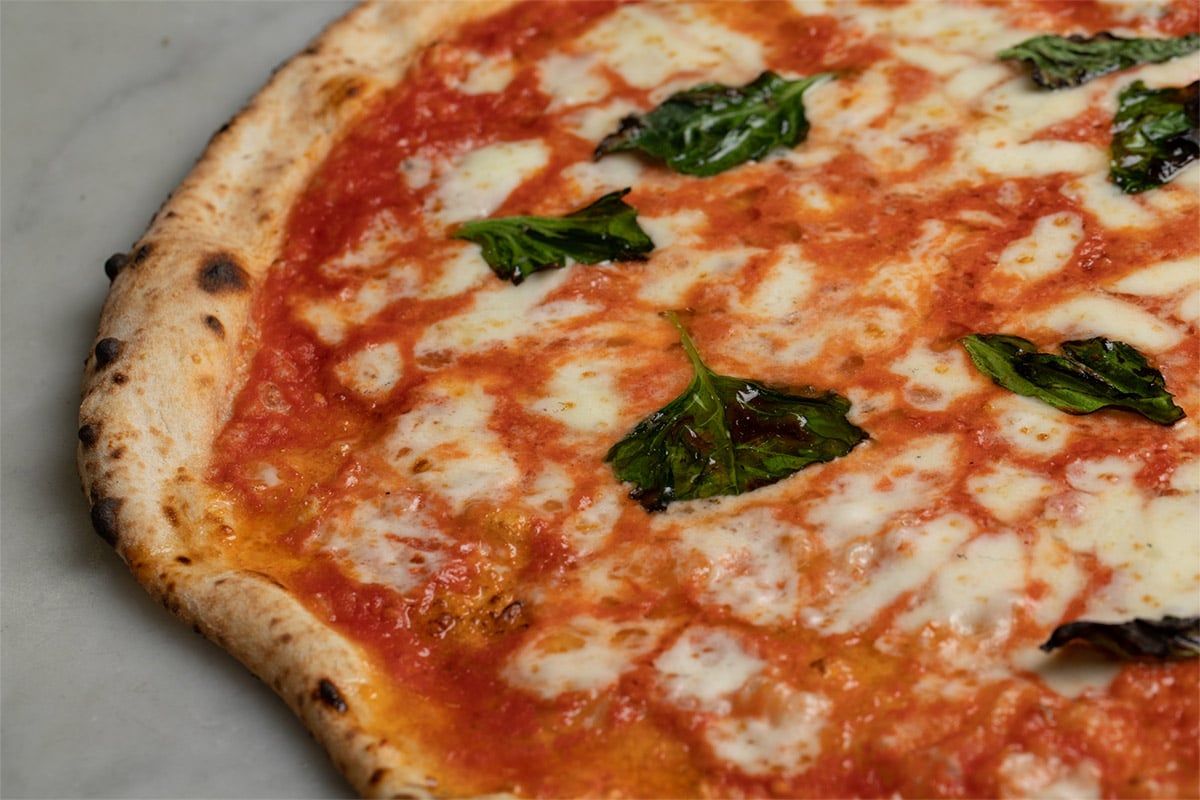 The Neapolitan tradition also establishes the quality and amount of the ingredients.

A litre of water and 1.6 kg of type 00 flour are kneaded with the yeast and 50 g of salt (the salt should be added after the four and yeast so that it does not come into direct contact with the yeast).

The amount of yeast varies according to the type used: 3 grams of fresh brewer’s yeast or 1 gram of dried yeast.

The classic Neapolitan pizza has a very specific aspect, consistency and taste. It is soft and thin, and is often folded over on itself but it has a billowy crust, known as the cornicione, which is airy and puffy, and about 2 cm high. It is round and often is so large that the sides hang off the plate it is served on.

The three commandments
The traditional recipe for a Neapolitan pizza follows three simple rules, that are like holy commandments for the pizzaioli. They are:
– The dough is made up of only 4 ingredients: water, salt, yeast and flour.
– The proofing time must not be less than 12 / 14 hours (and can be more to make it more digestible). This must be at a controlled temperature of between 15-20°C and a humidity between 70% and 80%.
– It must be cooked in a wood-fired oven.

The fermentation process is rather delicate and must be carried out with particular care. The dough is left to rest in a warm and damp place so that the surface cannot become hard, and form a crust that would block its maturation. Often, it is covered with a damp cloth.

After this first fermentation of 4 hours, the dough is divided into 10 portions. Each portion, of about 250 g each, will make a pizza of 30 cm in diameter. This is followed by a second fermentation of at least 8 hours, which allows the complex sugars of the flour to break down into simple sugars and to be more easily digested.

After the proofing, the pizza base must be formed from the dough balls. With a motion from the centre outwards, and with the pressure of the fingers of both hands on the dough ball, the base is turned over and around many times so that it stretches uniformly. The centre of the pizza should not be more than a couple of millimetres thick unlike the crust that must remain thicker and soft so it can contain the pizza condiments.

As mentioned, the authentic Neapolitan pizza needs to be cooked very quickly (just a minute or a minute and a half at most) in a wood-fired oven, at a temperature of about 450°C. Obviously, a domestic oven cannot replicate this cooking method, but there are some solutions available for sale that can allow home cooks to get similar results to pizza cooked in a wood-fired oven. 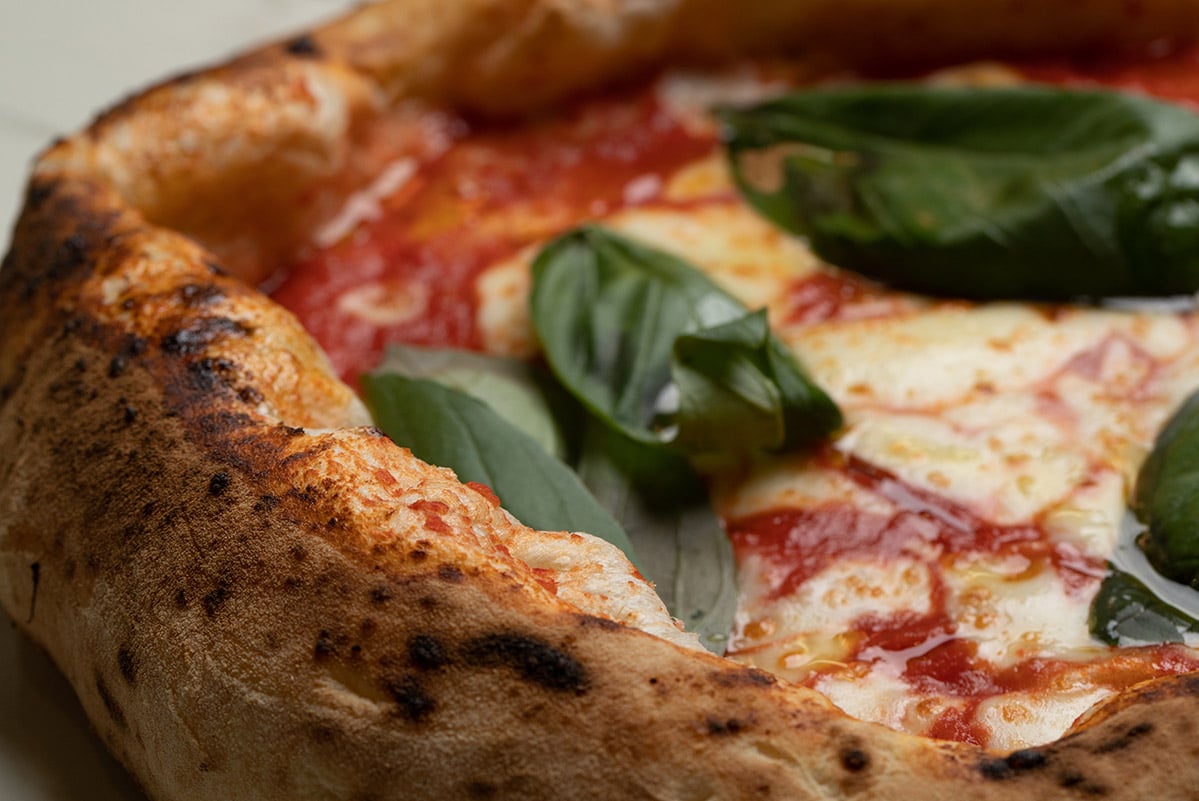 The contemporary Neapolitan pizza differs from the classic pizza in the type of dough, proofing time and stretching method.

After this first rising, the dough is refreshed with 280 ml of water and 30 g of salt, kneaded again for 10 minutes, portioned into 6 loaves and left to rest for another 8 hours. After the second rising, the pizza base is formed from each loaf. With a motion from the centre outwards, and with the pressure of the fingers of both hands on the dough ball, the base is turned over and around many times so that it stretches uniformly.

The centre of the pizza should not be more than a couple of millimetres thick. The crust in the contemporary pizza is more emphasised than in the classic one, airier, higher and thicker.  The oven temperature also needs to be higher (about 500°C).

Different condiments are proposed as toppings for the Neapolitan classic and contemporary pizzas although the same could be used for the gluten free or wholemeal ones. Only cooking time and oven temperature differ. 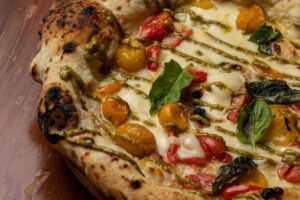 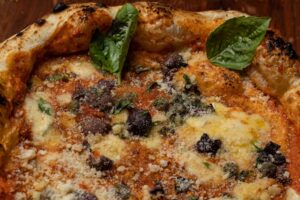 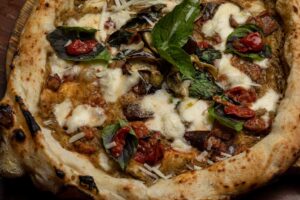 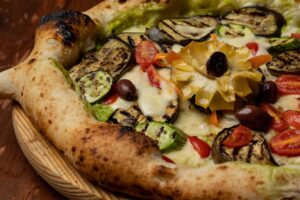 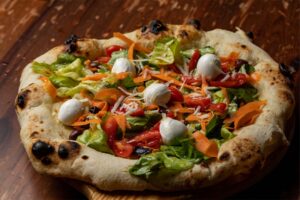 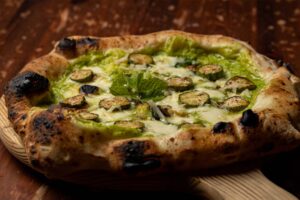 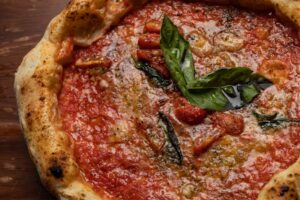 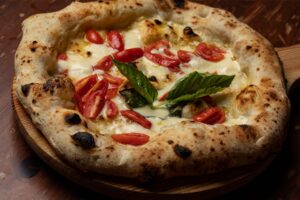 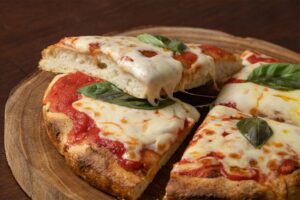