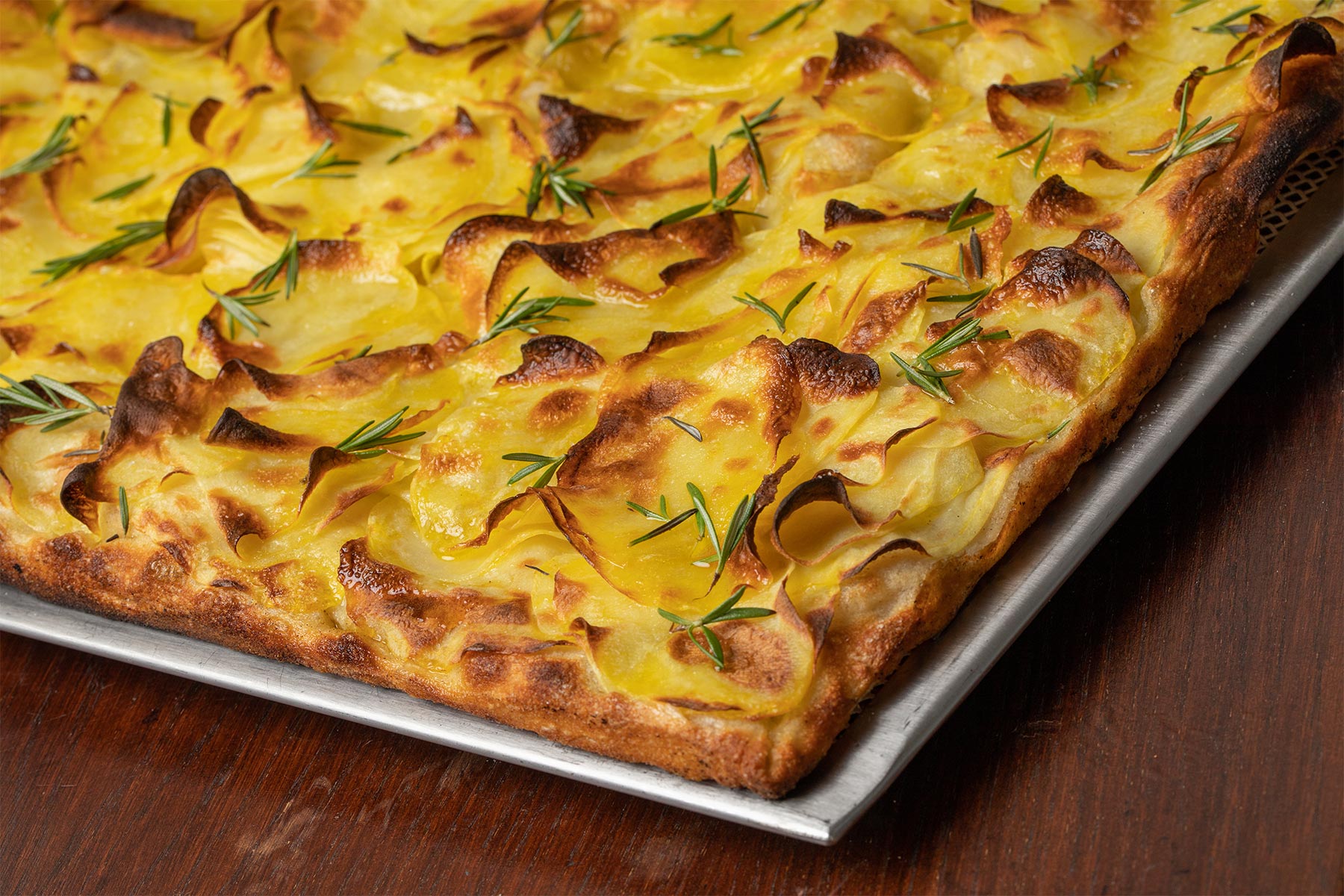 Invented in Rome, pizza in teglia, or pizza by the slice, has always been one of the most popular street foods in Italy, and is now popular all the world over, thanks to its versatility. It can have so many different toppings, is easily reheated without affecting its taste and can be eaten without a knife and fork, thanks to the shape and consistency of its slices. The real Roman-style pizza in teglia must have the following characteristics: thin, crunchy dough, crunchy lower surface and upper surface, slightly moist crumb, with the presence of large, honeycomb-like air pockets, a hydration greater than 70%, first bulk fermentation in the refrigerator and subsequent proofing in loaves, and baking at a temperature of around 300 ° C. Making Roman-style pizza in teglia involves 6 phases: kneading, first rise, cutting and shaping, proofing, spreading and topping and finally baking.

Techniques for kneading the dough with an electric mixer

Put all the flour, brewer’s yeast and oil into the mixer bowl. Just turn the dough hook once to slightly mix the ingredients and add the salt.

Then knead at the lowest setting until the dough comes away from the sides of the bowl and is compact, smooth, firm, semi-glossy and elastic.

Then start adding the remaining 72 g of water, little by little; wait each time for the dough to absorb the water completely before adding any more, until all the water is absorbed.

The whole kneading process should be completed in about 20-25 minutes. Remove the dough from the mixer bowl, shape the dough to a compact loaf and place it in a oiled Tupperware container. Mark the level of the dough on the outside with a pen so you can check how much it rises. Close the container with its lid.

The time needed to start the rising process will vary according to the temperature:

After this, put the dough in the refrigerator at 4°C for about 44 hours; in general this is the temperature in the vegetable drawer in the lower part of the refrigerator. The rising time varies from a minimum of 24 hours to a maximum of 72 hours. The dough should more or less double in size.

After it is risen, remove the dough from the refrigerator, flour a work surface and turn the dough out onto it, without touching it or forcing it. The dough will naturally fall thanks to its own weight. If you have more dough than the size of the pizza tray, you need to divide the dough into portions. Take the scales and divide the dough into loaves using the following formula:

Once you have weighed the loaves, shape them with a series of letter-folds (in three), prior to the second leavening phase known as the appretto, placing the loaves in airtight oiled containers.

The appretto is a second leavening at room temperature for a minimum of 3 and maximum of 4 hours. It allows all the gases to form in the dough and helps to create the right balance between leavening and stretchability. The time needed varies according to the formation of gluten and anyway the volume should double.

Turn the oven on to the highest temperature. If you have a pizza oven which can be temperature adjusted for the top and bottom heating elements, the bottom should be at 300°C-320°C and the top at 200°C (conventional oven).

Flour generously a work surface so that the dough cannot stick. Turn out the loaf onto the flour, letting into fall on its own without touching it, as otherwise you risk damaging the bubbles from the leavening.

Use the tips of your fingers spread apart and parallel to the dough to gently form the dough into a rectangular shape. Proceed by sealing the edges and then move from the bottom to the top and vice-versa, gently pressing the dough so that the gases in it are evenly distributed.

Then transfer the pizza to the baking tray. Add the topping you prefer; if using mozzarella or fior di latte cheese wait to add until halfway through the baking.

Now the pizza is ready to bake. In a pizza oven, which reaches higher temperatures, cook for between 8 and 13 minutes depending on the topping.

A well-made pizza will have a uniform thickness and evenly distributed alveoli or holes of up to 10-15mm in diameter without excessive isolated swelling.

Remove from the oven and transfer onto a rack so it can cool without the bottom getting soggy from the condensation of the steam.