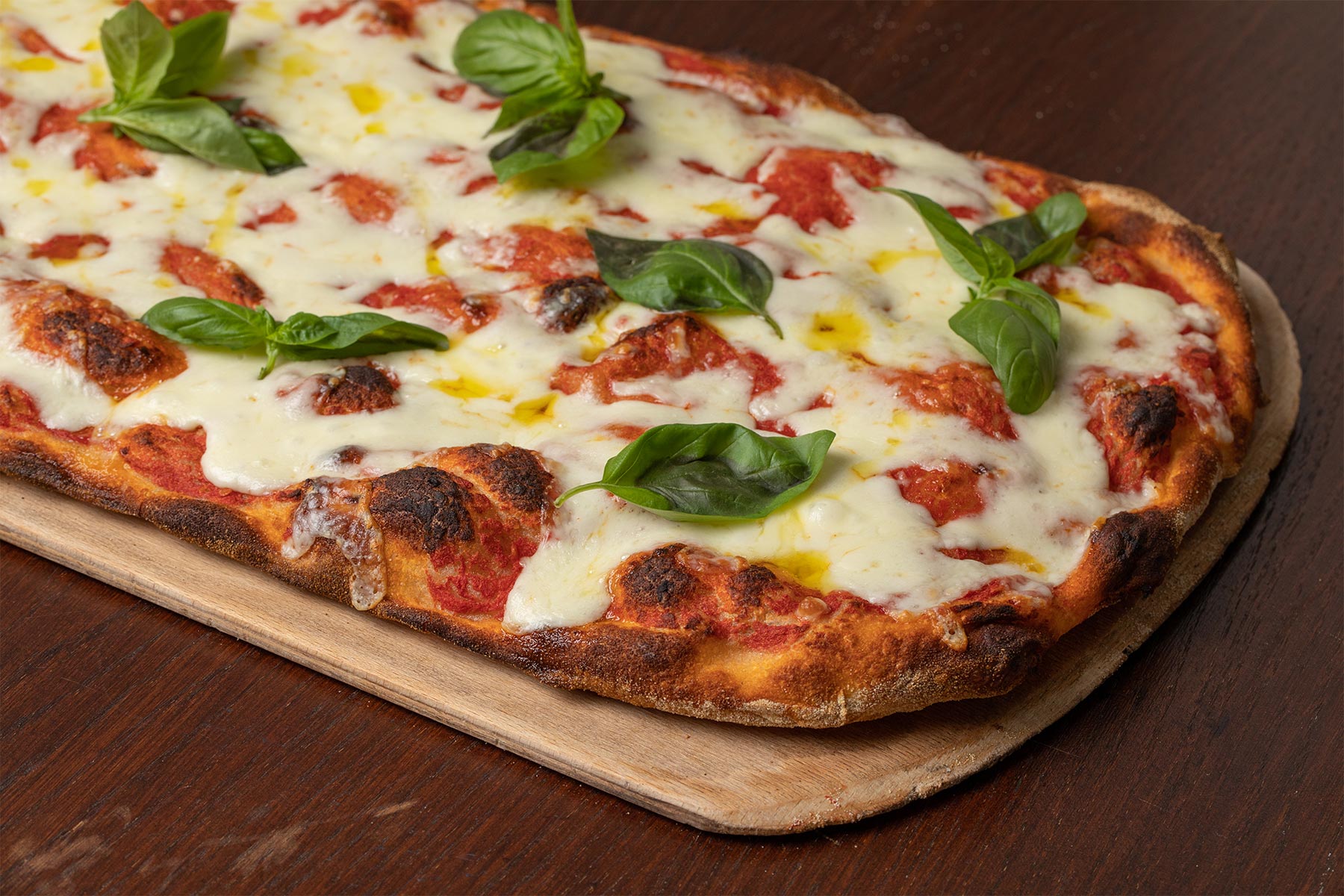 Romana Style Pizza In Pala (Pizza On A Paddle)

Pizza in pala makes you think of Europe but most of all of Rome, of “do it as Italians do”. Pizza in pala is served on the namesake paddle and is rectangular, usually 80 cm up to 120 cm long and 30 cm wide. It is ideal for dinner with family or friends. It can cater to all tastes and personal choices, and sometimes it is called the “pizza of friendship” because of this. It is garnished directly on the paddle used for cooking the pizza; traditionally the paddle was made of wood but today aluminium paddles are also used. The pizza in pala is crispy and light with a high-hydration dough with 75%-80% water ratio to flour. The dough is left to rise in the refrigerator for at least 18/24 hours, or up to 48 hours or more depending on personal choice. It is baked in a wood-fired or electric oven at a temperature of 280°C- 300°C for about 7-10 minutes.

Dissolve the yeast in 10% of the cold water. Put the flours in a stand mixer with the salt and 55% of the cold water and knead at the lowest setting for 2-3 minutes, then slowly drizzle in the olive oil until it is completely absorbed.

After 5 minutes from starting to knead, drizzle in the cold water with the dissolved yeast. After another five minutes, increase the speed to the second setting and add the rest of the water until it is completely absorbed.
Leave the dough in the bowl without kneading for 10 minutes and then just make 3 turns of the dough hook. This will ventilate the dough and help to form well-developed and resistant gluten.

Remove the dough from the mixer bowl, place in a container and letter fold the dough. Leave to rise for 3 hours at 22°C, then shape and leave to rise at room temperature for another 4-5 hours.
Alternatively, after taking the dough from the mixer bowl, place it in a container, letter fold and leave as a single mass in the refrigerator for 24-30 hours in an airtight container. If you want to increase the proofing time, you should reduce the yeast. Afterwards, turn the dough out on a floured work surface, divide into four and shape into compact balls.  Place the dough balls in an oiled bowl or on a working surface or sheet, cover with cling film and leave for 6 hours at room temperature.

Flour generously a work surface so that the dough cannot stick. Turn out the dough balls onto the flour, letting each fall on its own without touching it, as otherwise you risk damaging the air pockets from the leavening.

Use the tips of your fingers spread apart and parallel to the dough to gently form the dough into individual oval shapes. Transfer the pizza onto to the baking trays—2 per tray—carefully, so as not to damage the air pockets in the dough.

Add the tomato topping and bake several minutes or until the dough begins to rise at the edges and the tomatoes to cook; remove from oven and add any cheese you are using as topping:  mozzarella or fior di latte cheese.

In a pizza oven, which reaches higher temperatures, cook for between 8 and 13 minutes depending on the topping. A well-made pizza will have a uniform thickness and evenly distributed alveoli or air pockets of up to 10-15mm in diameter without excessive isolated swelling.

Remove from the oven and transfer onto a rack so it can cool without the bottom getting soggy from the condensation of the steam.

Some ideas for your pizza in pala